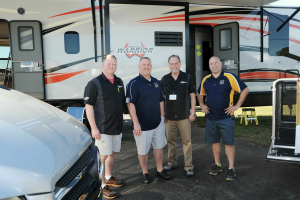 (L-R) The Factory RV Vice President Todd Trevino and co-founders and co-owners Dave Middleton, Brian Shea, Claude Donati
In an era when startup companies are becoming more the exception than the rule, three experienced RV industry executives have launched a new manufacturing firm specializing in factory-direct sales of towable Weekend Warrior toy haulers and Avion-brand Class B motorhomes – both iconic brand names from earlier days in the RV industry.
The new manufacturing firm, employing almost 100 people in a 50,000-square-foot, former woodworking plant in Wakarusa, Ind., is called The RV Factory LLC — a name that could become as famous in the RV business as its two initial brands if things go as planned for co-founders and co-owners Brian Shea, Claude Donati and Dave Middleton.
The three former Gulf Stream Coach Inc. executives are already well established as partners in NeXus RV, an Elkhart, Ind., company launched in 2010 that also promotes a relatively unusual factory-direct business model in which the traditional dealer is eliminated altogether while factory personnel take front-line roles in interfacing with end consumers.
“We purchased the facility in May of last year and we’ve been tooling it for production since last summer,” said Shea, a key investor in NeXus and chairman of The RV Factory who first went to work in 1971 for Fairmont Homes and ultimately served as president of RV builder Gulf Stream, both companies founded by his father, Jim Shea Sr. “We built prototypes in a facility in Elkhart and then purchased and expanded into a really up-to-date plant that had been built in 2008 and left vacant in Wakarusa.
“The property is now improved for our use,” he added, “and we have plenty of acreage to expand and will have camping sites for our customers to use during their visits. We will also be featuring factory tours on demand for our customers — no appointment necessary.”
The RV Factory unveiled its affordable Avion Azur Class B in January at the Florida RV Trade Association’s (FRVTA) Florida RV SuperShow in Tampa. Sporting a brand name dating back to the 1940’s and to a Benton Harbor, Mich., plant where Fleetwood Enterprises Inc. built towable Avions for a period of years, the coach is assembled on an extended, high-roof, 3500 Mercedes Sprinter van. The self-contained, highly insulated, four-season, six-passenger Avion features a fully equipped bathroom with shower, a fixed-down rear king bed and stand-up headroom in a small motorized coach. With abundant storage and full length wardrobe space, the Avion can retail for less than $100,000.
“One of the things that sets this apart is our expanded width area back in the bedroom, thanks to a pop-out window design,” said Donati, also president of NeXus. “So, it allows you to sleep widthwise instead of lengthwise, which adds about 12 additional inches of floorplan flexibility.
“Essentially, it gives you more floorplan space because you can sleep sideways instead of lengthwise,” noted Shea, adding that retail prices on the Avion run from $89,000 to about $105,000 with an all-solar electric package in a market that typically extends up to $120,000-$140,000. “We have a 300-watt solar panel package with four AGM batteries, and you can basically boondock for weeks without having to use your generator.”
The RV Factory’s Weekend Warrior toy hauler, a brand that in its original form led to an explosion of rugged, desert-worthy sport utility RV’s with convertible rear garages before the 2008 demise of Perris, Calif.-based Weekend Warrior Trailers Inc., is available with steel-cage construction as a travel trailer and fifth-wheel in lengths of 24 to 44 feet.
The new Weekend Warrior sports laminated sidewalls, floors and roofs and garages and true to its nameplate is capable of handling sand rails, dune buggies, Harleys and (Polaris Ranger) RZR’s. Other relevant selling points include residential microwaves, Kicker sound systems, 20-gallon fuel systems with filling stations, scissor leveling systems and ducted roof air in a wide range of standard and custom configurations that, The RV Factory’s management team maintains, fits well with a factory-direct business model.
“It’s very difficult for the dealer to know how to stock that product because there’s such a variable usage for it,” said Middleton. “So customers now can go to our website at the RV Factory, and select any option they want that’s going to apply to the way they use it. And with an iconic name like Weekend Warrior, we are instantly on the short search list for every single toy hauler out there. And now, being factory direct, we can put an (electrical) outlet wherever you want it. And if you’re going to have a RZR, you want to make sure your garage is a certain length. The RV Factory can supply that (info) for you.”
In any event, Middleton and his partners are convinced, the Weekend Warrior name still has plenty of cachet in the RV universe. “At first there were some concerns because the name had been sitting dormant for awhile and it didn’t end pretty with that company,” said Middleton, who also serves as vice president of NeXus. “But we think that those customers that were truly loyal and consider Weekend Warrior as the true brand name for a toy hauler, they’re the ones that we’re talking to now.”

The screws could fail, causing the supporting bracket and the awning to fall and potentially injure a person beneath it.

If the ramps are overloaded, the ramps may fail, increasing the risk of personal injury.

Crossroads RV will notify owners, and supply with them with corrected load capacity labels to place over the existing labels, free of charge. The recall began February 3, 2015. Owners may contact Crossroads RV at 1-855-886-7496. Crossroads RV's number for this recall is 35.